INTERPRETATION OF SGEM WHITE PAPER: HOW THEY MADE A MORE ENTRANCING BLOCKCHAIN GAME THAN AXIE INFINITY?

Let me ask a question first: What is the most fascinating blockchain game on the Internet today? Axie Infinity? Decentraland?

In fact, there is NONE that good enough, especially in playability, to convince both traditional and blockchain game players.

It is not complicated to grasp the situation. In the early stage, the game market focused on how to get the largest amount of money at shortest time. It is when so many developers were busy mixing the gameplay with blockchain and made their investment counts as soon as possible. Consequently, few people would think about what kind of gameplay goes well with blockchain. While gameplay is such a basic part of the playability and expanding of a game, it is not hard to understand why a convincing product was not in sight.

Encouragingly, this consequence will soon be changed. Recently, SGEM, a blockchain game which took four years in developing, announced its worldwide close-beta, and released the white paper simultaneously. This white paper of 58 pages introduces all details from gameplay patterns to the economy system design. It shows us the most competitive blockchain game which supplants Axie Infinity on the market, right in front of us. 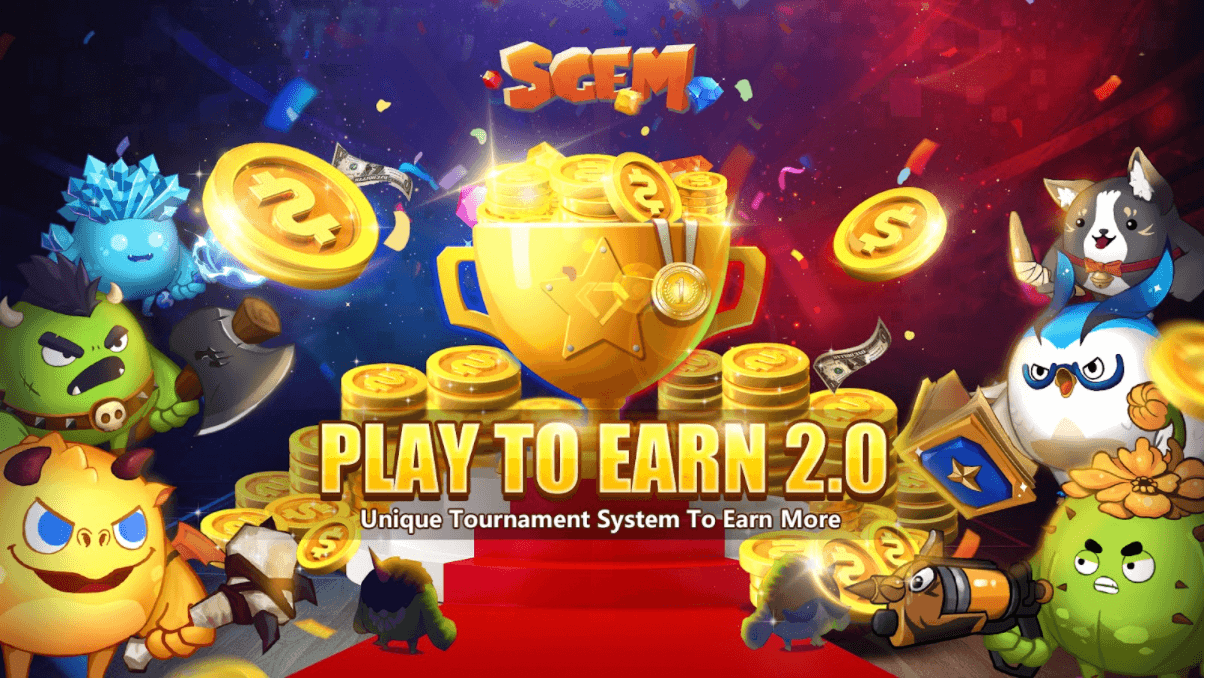 According to the white paper, SGEM is a blockchain game space for players to experience the digital gem (NFT) creating process, as well as its incredible game world—a colorful virtual entertainment space runs on Ethereum, This virtual entertainment space is not just open to all game developers but other blockchain game products. The account and currency system in SGEM allows players to smoothly switch from one connected game to another, or to transfer their game assets freely among them.

SGEM City, the first connected game of SGEM, an original game from SGEM development team, is a Strategy Tower-Defense blockchain game based on the concept of “enjoy more, earn more”. Its “hero + card + architecture” battle pattern and Play to Earn 2.0 are what we are going to highlight in the following parts.

A 5 minutes fast-paced attack-defense battle can be seen as a core gameplay in SGEM City. players raise their Babos, the hero NFT, and arm them with different skill cards, to attack the other players’ carefully constructed home bases which consist of all kinds of architectures.

This is the “hero + card + architecture” battle pattern in SGEM City. The highlight of this pattern is about its excellent expanding capability: with three elements, the number of gameplays can be countless. Take the followings for example:

l  The expanding of attack-defense battle: Diverse tournaments in SGEM City. For instance, there are asynchronous tournaments such as single foray attack, or 1 vs 1 or 2 vs 2 real-time free competition. Players can even bet on tournaments with their game assets, which might add some tension and excitement. And the absolute fair competition, letting players send limited types of heroes with cards to battle. Apparently, SGEM has more attractive gameplay patterns compared to the monotone Axie vs Axie, which remains unchanged for years. 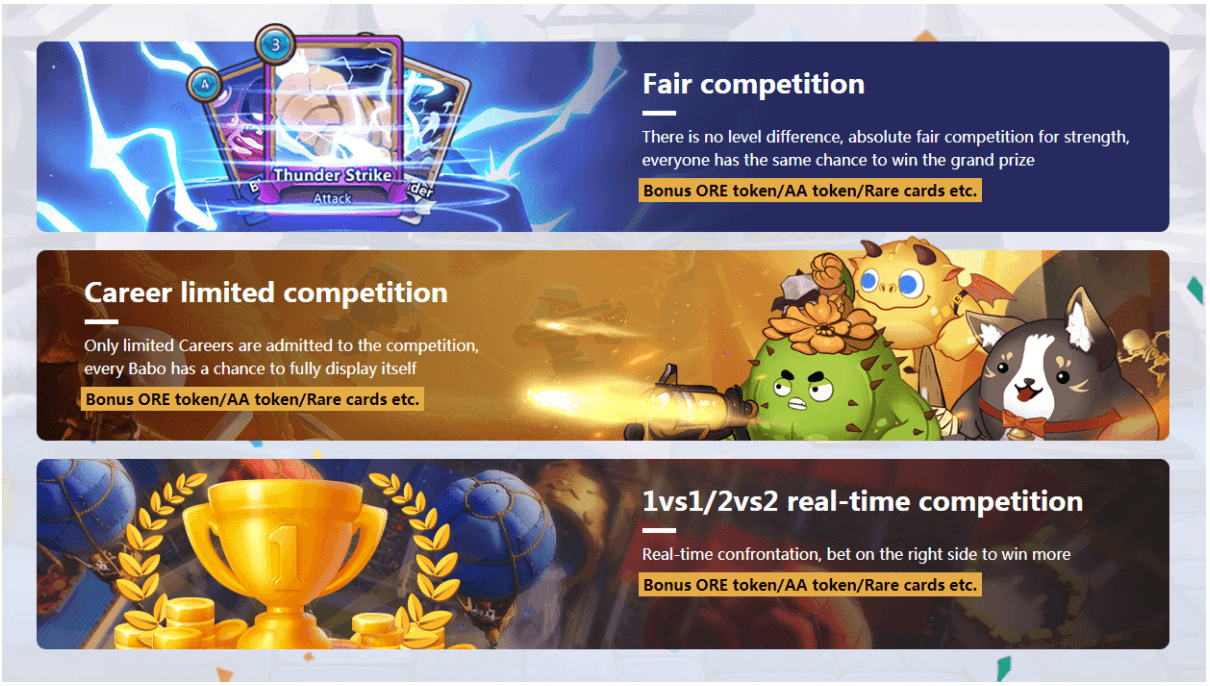 l  The expanding of game heroes: Diverse Babos. To make it a hero diverse game, SGEM City hires a” Babo raising system”. Each Babo carries different genes which decide its look and born skills. Players can breed a baby Babo by two of their Babos. The baby Babo inherits random genes from its parents. It will be so fascinating to dig into and find out what combination may breed the most powerful Babo NFT.

l  The expanding of skill cards: there are many exciting gameplays around cards in SGEM City which add variations to tournaments. Different cards contain different skills, as well as different variations and attitudes. Players can also combine two identical cards to make a skill-upgraded one. Players deploy different cards to Babos due to their varieties or attributes, using different combinations of cards provides different types of attack. Tournaments can become challenging due to players’ choices.

l  The expanding of architectures: a player’s home base depends on how architectures were deployed. The constructure of a home base needs strategy. For example, each architecture has different roles, so different combinations of architecture may trigger different effects — it sounds not bad to investigate combinations and try to build an impregnable home base. It is easy to see that this game can be more strategic and enjoyable when players start to focus on how to defense by deploying architectures to consume the enemy or to limit their foray.

l  The expanding of level up items: cards and architectures can be leveled up in SGEM City, which also brings the game more variations and entertainment. Like the Treasure Hunting in Cave Adventure, a little exciting gameplay in SGEM City, players can not only experience the thrilling tournament, but also get the opportunities to obtain important items to level up their assets. Also, players can try the recruiting mission: employ some adventurers to collect the level up items.

l  The expanding of social activities: social activities and gameplays in attack-defense battle are set to boost social among players. For example, the public channel where players can chat or arrange a battle with someone from the other side of the world; the “revenge “option in the attack-defense battle, encourages players who won’t surrender to fight again with the same rival. The idea of pursuing more possibilities to battle as well as social activities is something that never happened in other blockchain games, including Axie Infinity. 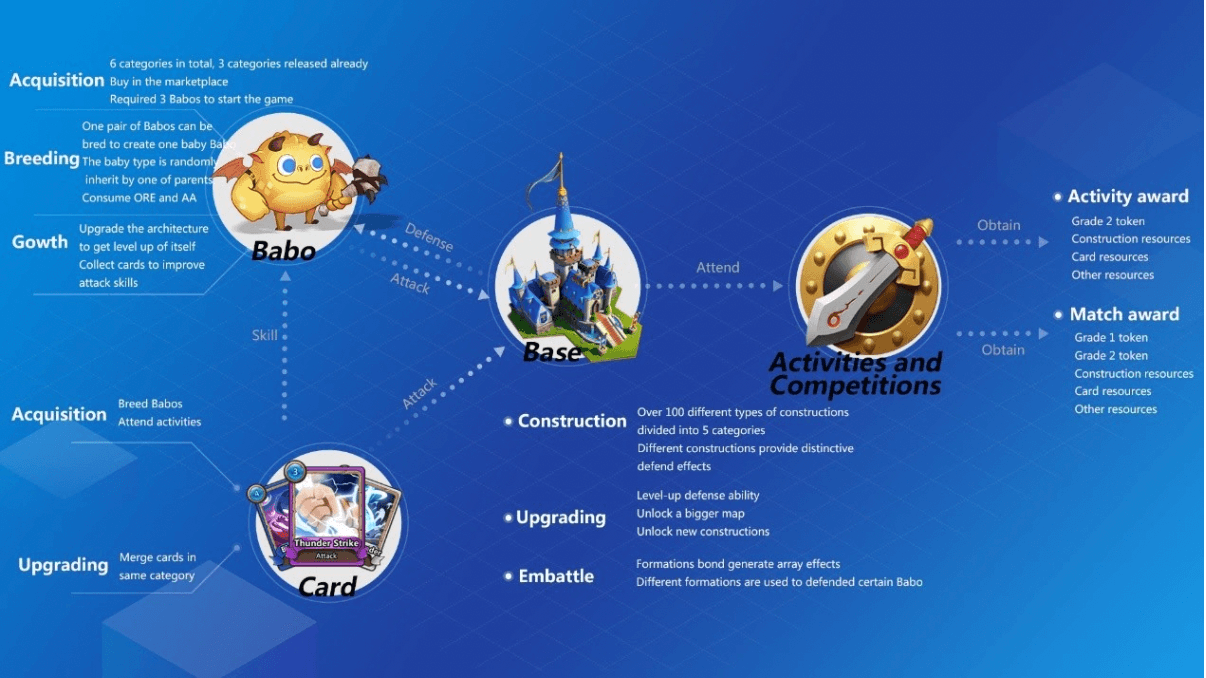 It may be easier to understand the idea of the game, SGEM City, by analogy with a tree: take the ”hero + card + architecture” battle pattern as the root, and the tree thrives because of so many lively branches, just like the plenty of gameplay patterns enrich the game and make the game sustainable.

Players in SGEM City will enjoy more fun and real experiments of “Play to Earn”, rather than dealing with the monotone process in order to” to earn”. I regard this a big assistance for traditional game players to embrace blockchain games.

The expanding of earning, Play to Earn 2.0

Obviously, the question of whether we can make money out of it, is the point players care most about a blockchain game, besides the entertaining. About earning, what has SGEM City done?

From the white paper we found the way SGEM City, the game full of colorful contents, integrates token rewards and various of gameplays, making an expanding of Play to Earn, or we can call it Play to Earn 1.0 from Axie Infinity, based on a new concept that SGEM teams advocates, called Play to Earn 2.0 By now, gameplays and means of earning in SGEM City come below:

l  By tournaments: SGEM City develops a unique tournament system which integrating token rewards and various tournaments to structure a stratified Play to Earn system. And this system runs all over the year. There are various tournaments with prizes in SGEM City such as annual, seasonal, monthly ladders; regular competition opens to all players, and the limit games. The prize for winning can be generous tokens or any important game resources. While there are numbers of gameplays giving players more opportunities to win the prize, there is only one in Axie Infinity. In SGEM City, players don’t have to fight against thousands of rivals for the little winning quota.

l  By raising game characters: players can raise Babos and sell the Babo NFT in the market. Players can hatch a baby Babo from two of their Babos. Breeding Babos with different attributes and sell them in the market is also a means to earn money. Of course, it is a good idea to buy one from the second and then sell it at the right timing and earn the profit.

l  By trading upgrading resources: collect cards and sell them for profits. Players get cards from treasure-hunting in mine, one of the gameplay of SGEM City, and the cards are available to be traded in the market. Likewise, players can make an investment of buying and selling cards in the market at the nice timing.

l  By players’ contributions: this is a unique Play to Earn pattern only happens here in SGEM City, at least so far, called Options Mining, a means to earn which based on players’ achievements in the game and contributions for expanding the project. 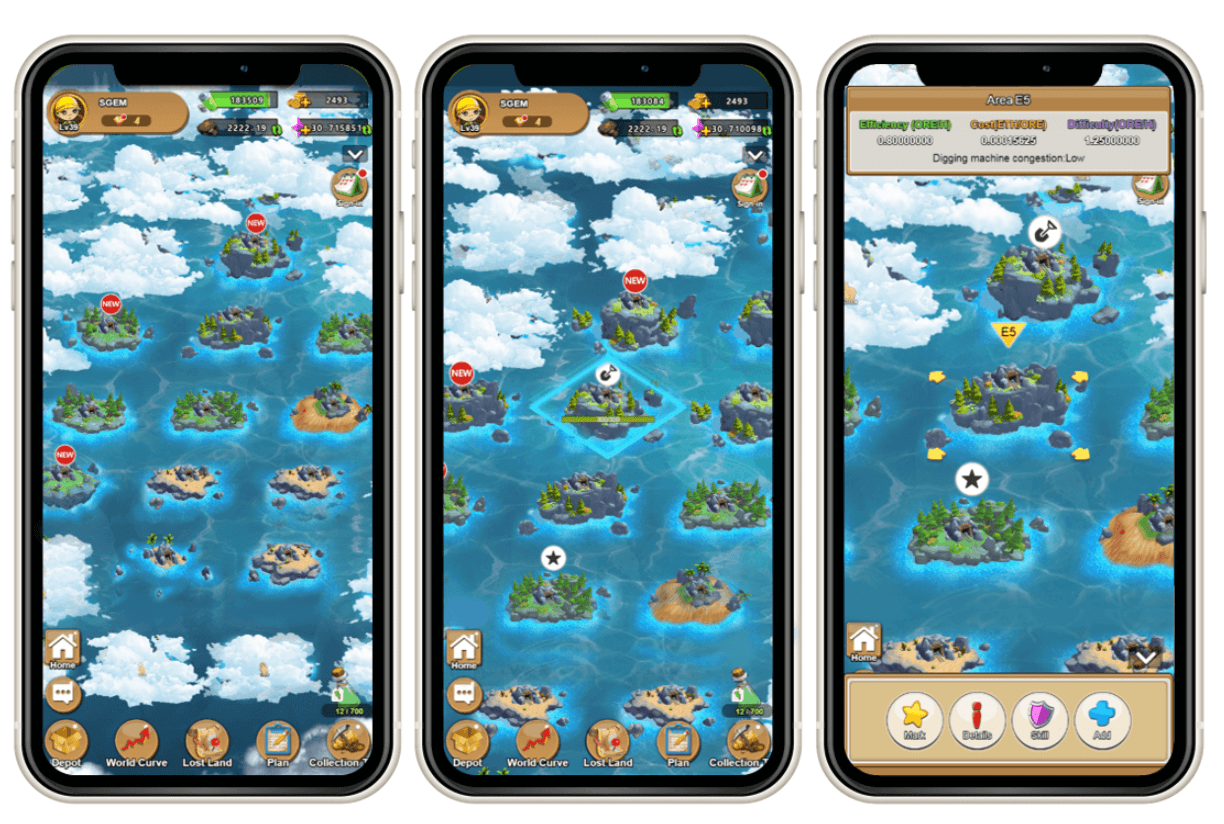 According to the white paper, players whoever makes their contributions to the project, or participates in important activities, or winner of all kinds, may get the chance to enter the Mining Area and unfold their mining. Players who have the qualification can mine for the Grade 1 token, ORE, with the consumption of issue price.

Compared with Axie Infinity, players here are having amazing opportunities to get great profit. As the project develops, more and more people are reaching the consensus on ORE. Those who devoted themselves in project developing or took active part in game building will be able to receive ORE with low cost even when the ORE price is rising. They will get benefit. Correspondingly, this incentive system will encourage players to take actions. 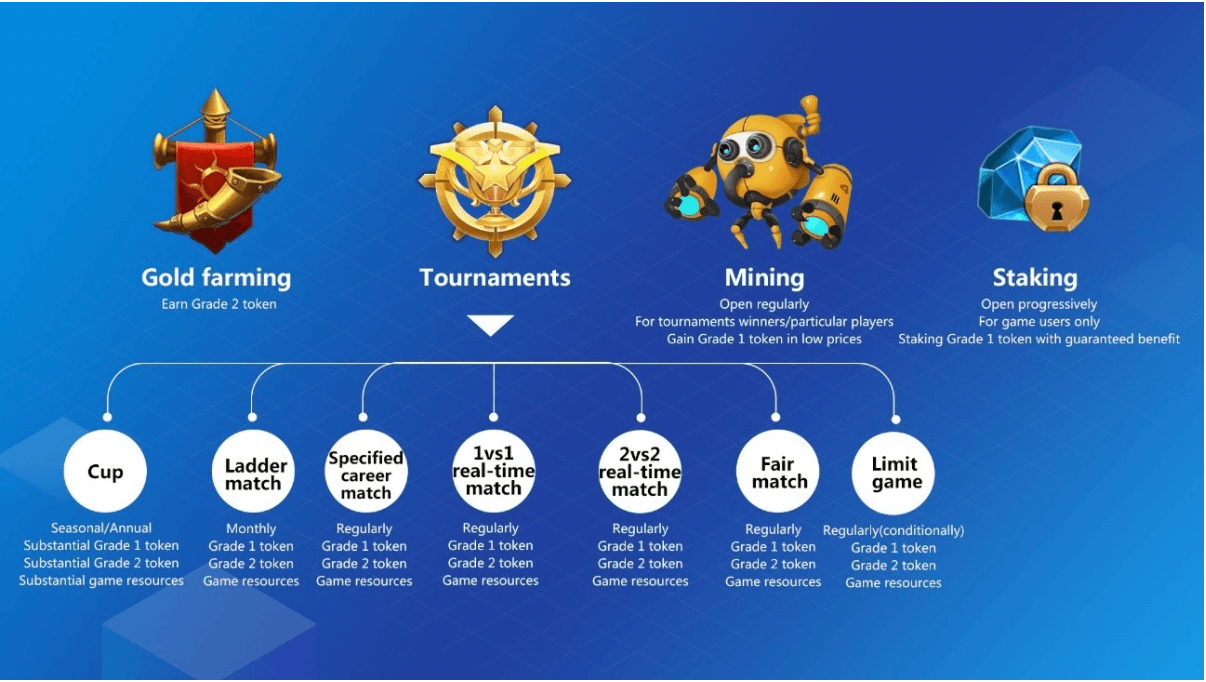 With better gameplay pattern foundation, developing and expanding gameplays, there are more ways to earn more. This is the true meaning of Play to Earn.

Besides, SGEM City is creating a fairer and more sustainable Play to Earn pattern for players. While Axie’s monotone gameplay can only provide limit ways to earn, and normal players today can hardly make money out of the limit means while top players are holding the most of them.

SGEM City develops the variety of gameplays and means to earn, integrating incentive token system and its colorful gameplays. SGEM City fulfills the Play to Earn 2.0 with developing a game that whenever players join in, there are always space for them to have fun, to grow and earn. The idea of Play to Earn 2.0 in SGEM City is the real and sustainable Play to Earn.

Besides contents and earning, SGEM is an unlimited game universe, a virtual entertainment space. According to white paper, there are three more blockchain games ready to connect. It refers to SGEM would be a new blockchain game goes further than we can imagine whether on gameplay contents or Play to Earn 2.0. 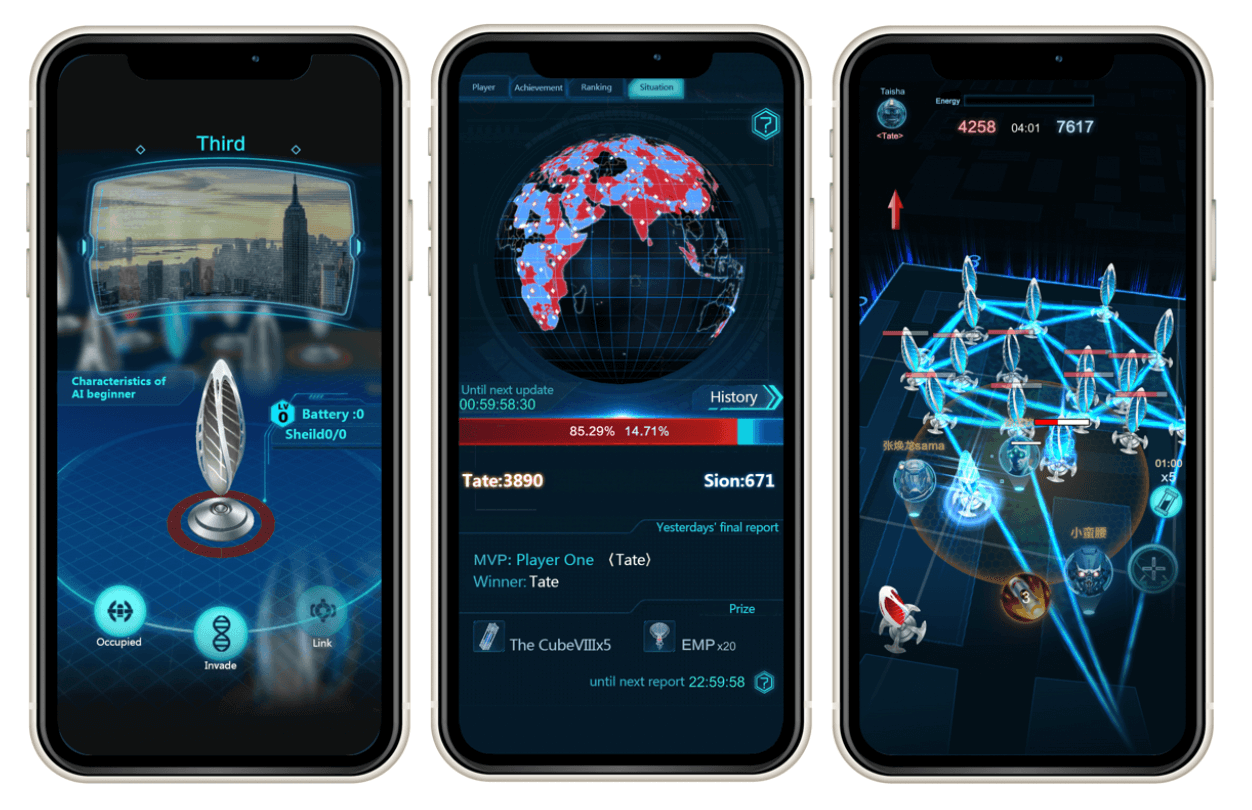 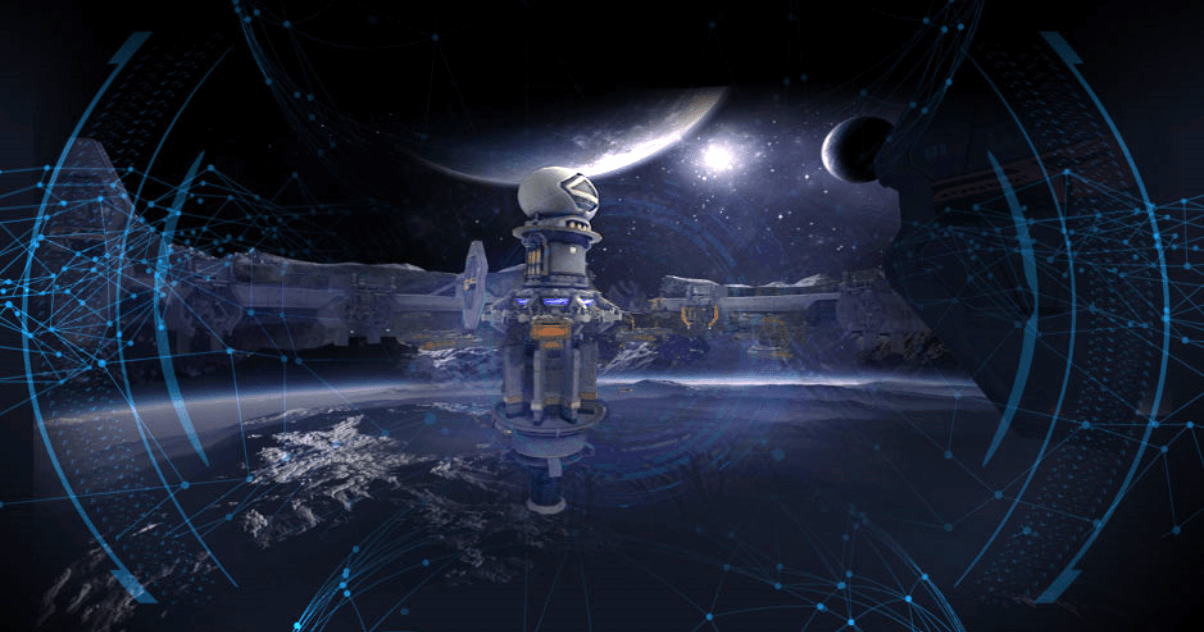 Today, it is never easy to devote into a blockchain game for four years. It shows us that immediate goods is not what the SGEM team is aiming, but a game that can run for ten years and more.

They’ve got excellent gameplay designs, huge and steady project planning, patience, and insistence beyond their peers’. I believe their outcome will never let us down.

The SGEM official states that there will soon be the first time they giving away invitation codes. What can we expect from SGEM? Can it supplant Axie Infinity to be the new symbol of blockchain games?  Let’s wait and see.

SGEM
Introducing SGEM and how to play it and how to earn from it.
Like
Like this Article
Currently there are no comments for this article. Would you like to be the first to write one?
Tags
Blockchain