A New Challenger to $DAI with Less Collateral Rate? How to Use It?

Liquity Protocol is a decentralized borrowing protocol that allows you to draw interest-free loans against Ether used as collateral. Loans are paid out in $LUSD (a USD pegged stablecoin).

Unlike stablecoins such as $DIGG and $FEI which are using algorithms to be stable, $LUSD is a collateral stablecoin. The same logic to MakerDAO’s $DAI, users will need to deposit to mint a $LUSD. Compared with $DAI, $LUSD’s collateral rate is relatively lower: You need to maintain a minimum collateral ratio of 110% (It means you need at least $110 to get 100 $LUSD). In addition to the collateral, the loans are secured by a Stability Pool containing $LUSD and by fellow borrowers collectively. 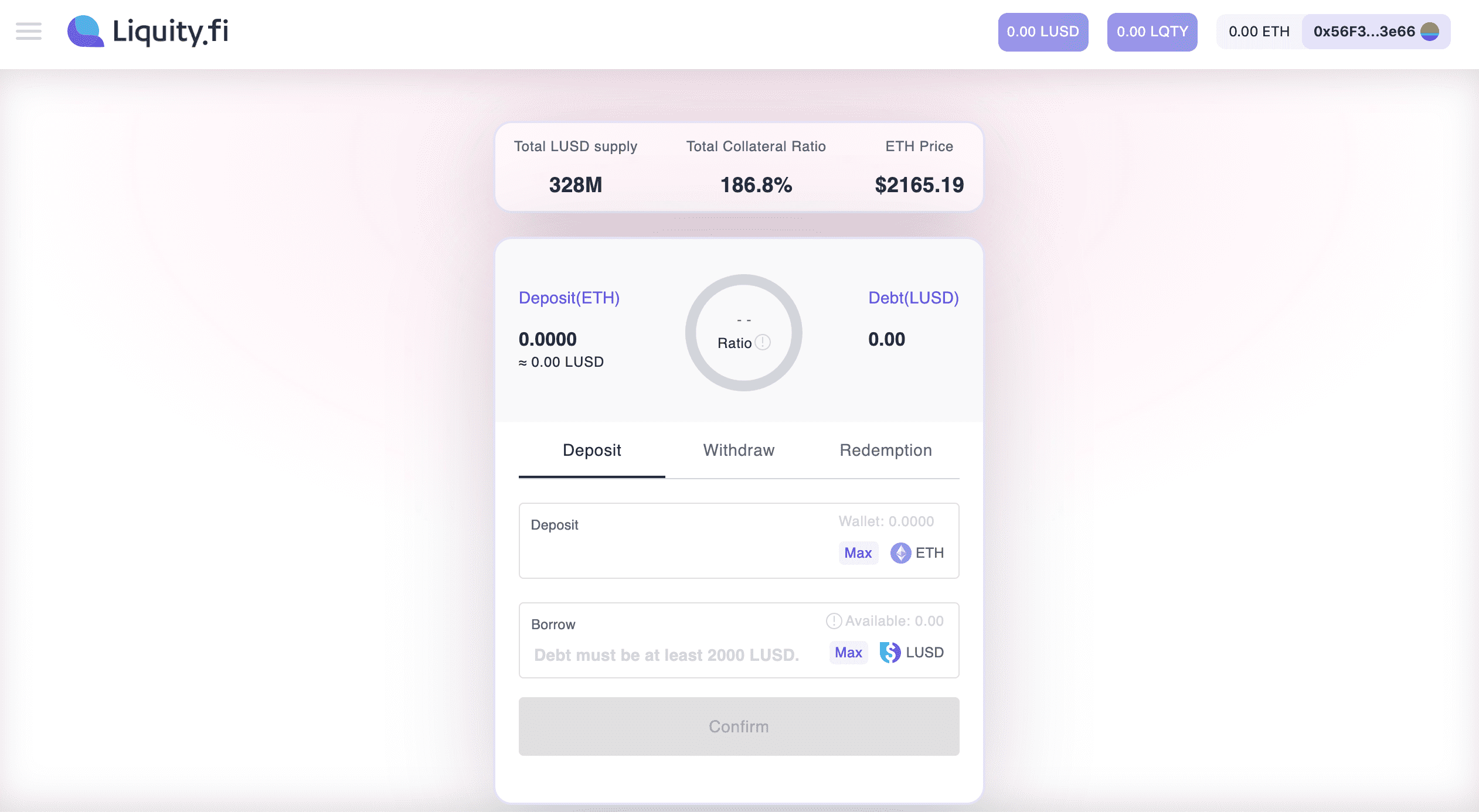 A Trove is where you take out and maintain your loan. Each Trove is linked to an Ethereum address and each address can have just one Trove. If you are familiar with Vaults or CDPs from other platforms, Troves are similar in concept.

In Liquity Protocol, you can enjoy a 0% interest rate - as a borrower, there’s no need to worry about constantly accruing debt. But you need to pay another type of fee to your frontend operator, we’ll explain it next.

How to Use It?

If you want to use Liquity Protocol, first you need to choose a web interface (frontend) to access the system.

The protocol does not operate a frontend directly. The frontends are decentralized. Third-party frontend operators will provide a web interface to you, the end-user, connecting you to the Liquity protocol. 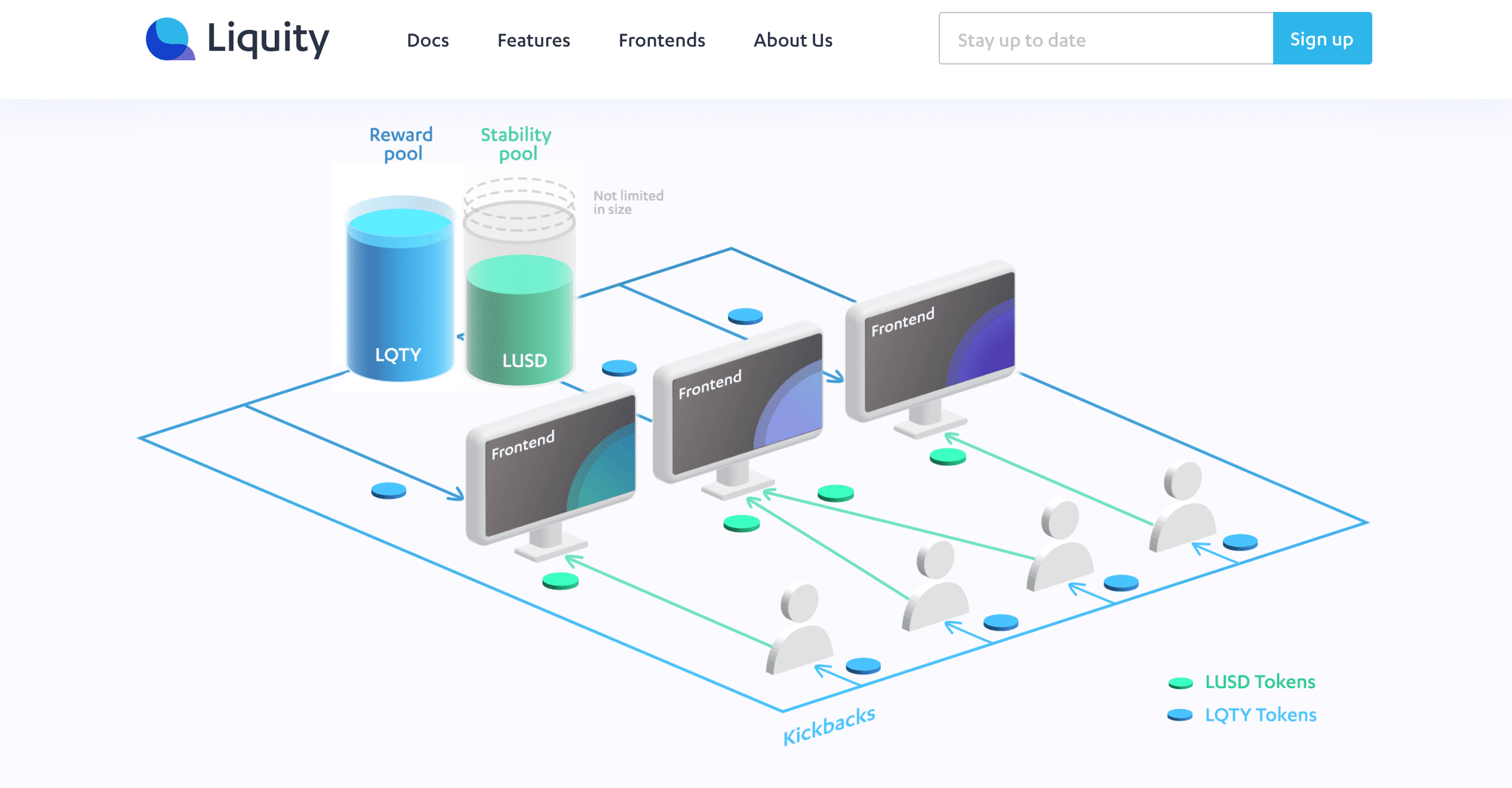 Liquity protocol pays out $LQTY (Liquity’s secondary token, not a governance token) rewards to you when you deposit LUSD to the Stability Pool. Frontend Operators can receive a portion of these rewards by tagging deposits facilitated by their interface and specifying the percentage of $LQTY to “kickback” to their users. Kickback rates are only associated with Stability Pool deposits.

There are 13 frontends for you to choose from at the time of writing.

The Stability Pool is the first line of defence in maintaining system solvency. It achieves that by acting as the source of liquidity to repay debt from liquidated Troves—ensuring that the total $LUSD supply always remains backed.

You can stake $LUSD in the Stability Pool to earn $LQTY rewards. 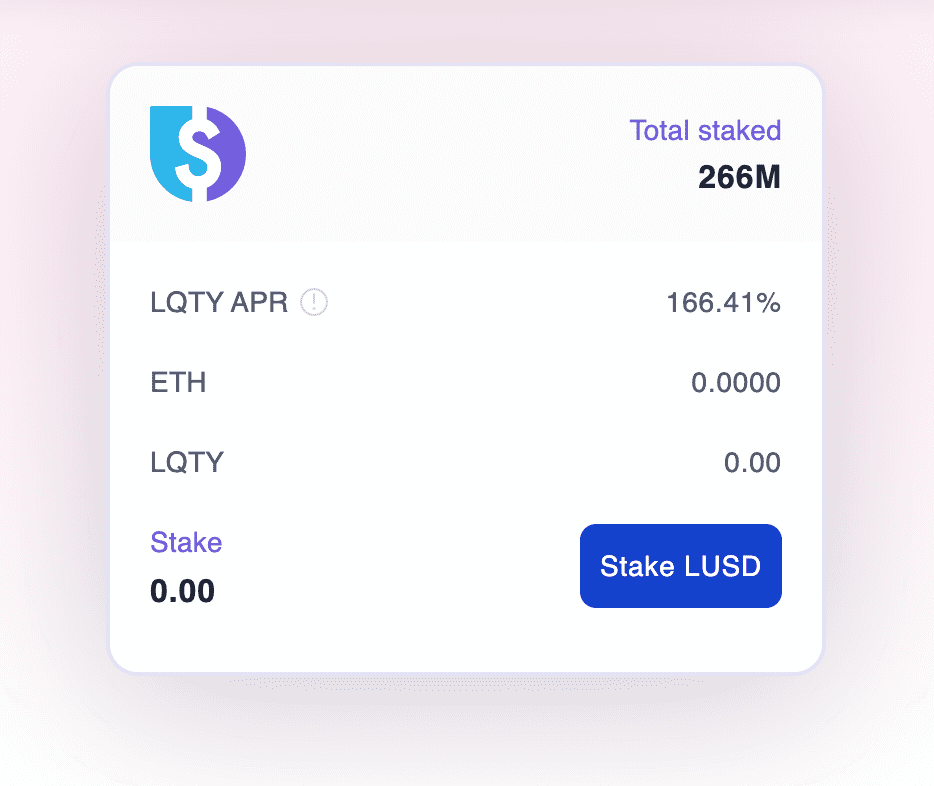 The current $LQTY APY is 166.41%. This is a relatively good choice for a liquidity provider because you do not need to buy in $LQTY to bear its price fluctuation. By providing liquidity to the $LUSD pool, you are actually doing stablecoin mining which you do not need to bear the price fluctuation of the token you bought. But the first prerequisite is whether stablecoins are sufficiently stable. 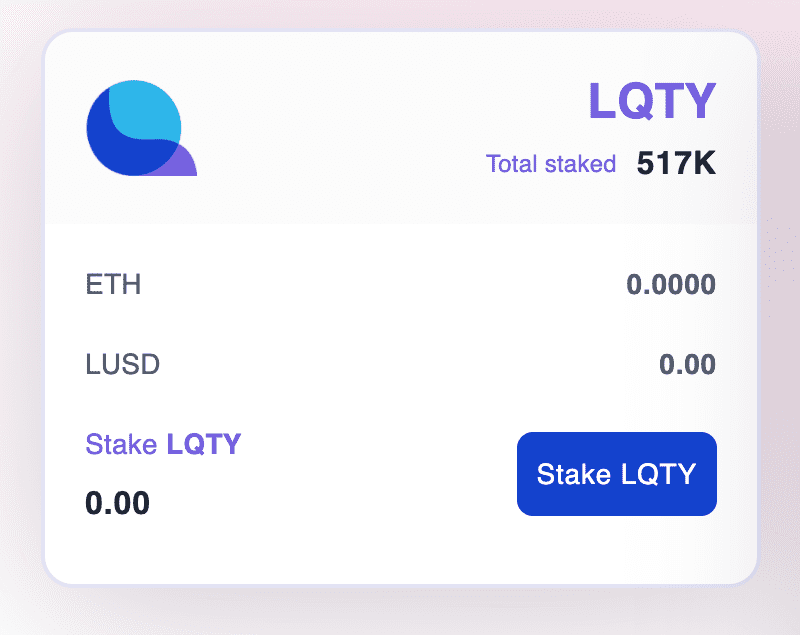 To start staking all you need to do is staking your $LQTY token to the Liquity staking contract. Once done you will start earning a share of the borrowing and redemption fees in $LUSD and ETH.

516.247K $LQTY tokens are staked at present. This is a very crucial number for users who are staking $LQTY. Do keep track of $LQTY staked amount changes on Liquityfi Protocol on dapp.com to keep your assets safe. 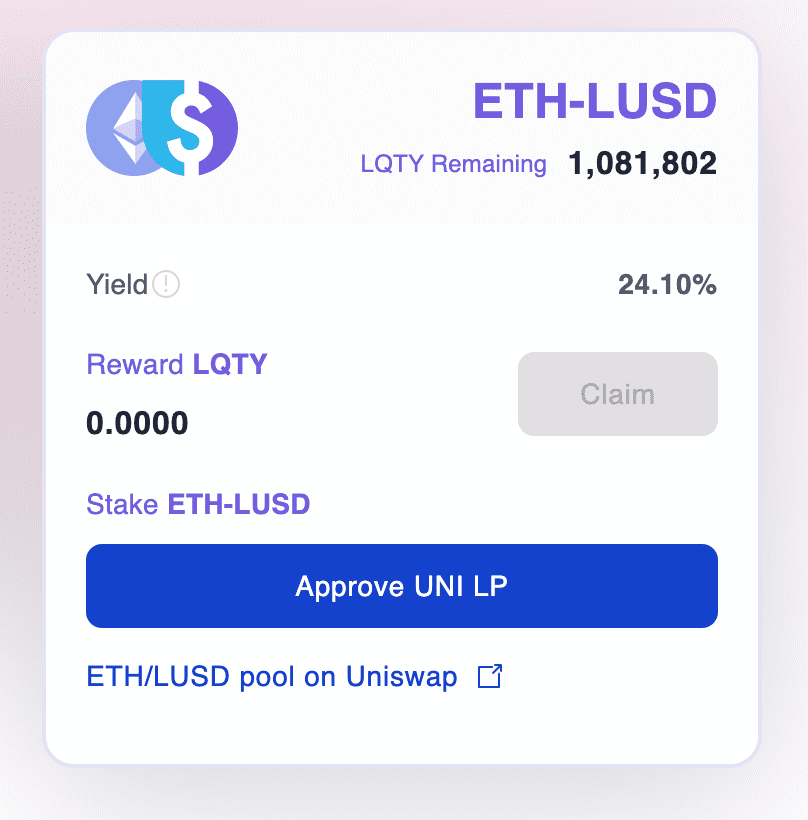 Liquity protocol reward ETH-LUSD Uniswap LPs. $LQTY will be rewarded from launch (April 5) over the course of 6 weeks to LPs of the LUSD:ETH Uniswap pool. The yield rate at the time of writing is 24.10%.

You can earn LP rewards by doing the following:

The same logic as above, for $ETH-$LUSD liquidity providers, you need to keep track of the below 2 numbers.

The active LP is 146 and the liquidity is $351.11k for now. The liquidity keeps going up since the launch.

How Do the Advanced Data indicate $LQTY Price?

What on-chain data should you check for your $LQTY token price analysis? There are 3 advanced data highly correlated with the $LQTY price - Unique Borrower, Troves (Vaults) Created and Fees Earned.

Unique Borrower refers to the number of unique users who borrow $LUSD from Liquity Protocol. It sharply droped from 538 on 5th Apr to 52 on 9th Apr, then keeps at a stable level til now.

Troves (Vaults) Created means the total number of Troves created to deposit collateral in order to generate $LUSD stablecoins. You can understand it as the daily bank accounts open amounts.  . ItIt dramatically drops from 542 to 21 from 5th to 9th Apr. Afterwards, it remains stable.

Fees Earned calculates the total value of borrowing fees paid by the borrower. The fees earned curve shows almost the same trend as the $LQTY price curve: it dropped from $833.26K to ATL $43.46K on 9th Apr, then slightly rose to $244.53K on 12th Apr. We’ve introduced that you need to maintain a minimum collateral ratio of 110% to get $LUSD. So the more fees paid, the more $LUSD tokens are borrowed by users. 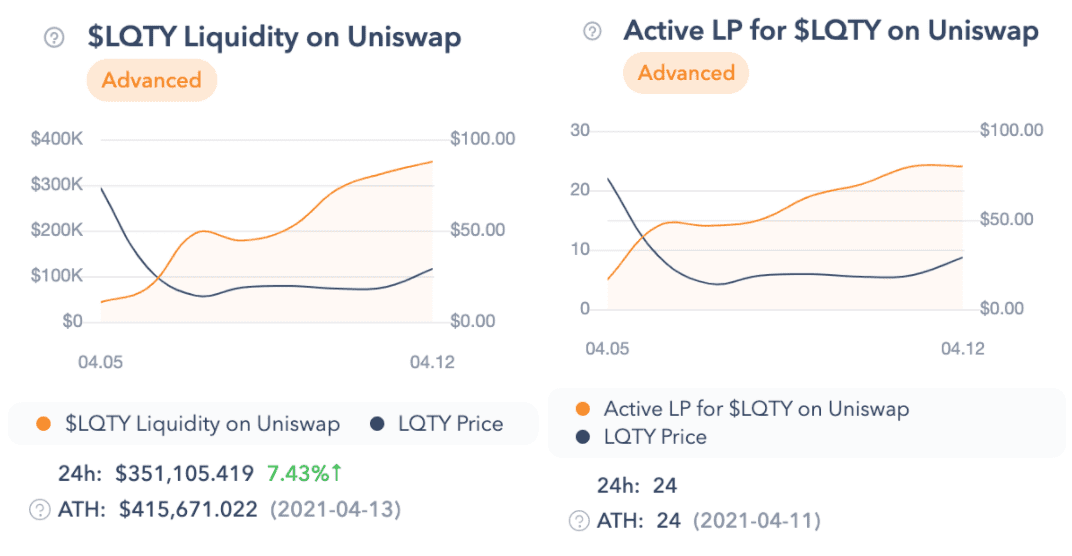 Does the $LQTY liquidity growth in Uniswap mean that traders bought more $LQTY tokens and provided them into the Uniswap pool?

No. The $LQTY net buy amount is quite low. Actually, more $LQTY tokens were sold than bought on 9th, 11th and 12th Apr. So where are the $LQTY tokens provided to Uniswap pool from? They are from Liquity Protocol’s distribution as rewards.

The $LQTY Reward Paid curve takes off ever since the project launch. In the first year, a total of 32,000,000 $LQTY tokens will be distributed. Until now, 419,180 $LQTY token rewards have been paid to users.

We’ve introduced that, you can earn $LQTY rewards from Liquity Protocol in 3 ways:

So the more $LQTY rewards paid, the more the above three interactions associated with the protocol have been done. The below 2 charts confirmed this fact.

The 2 charts are showing a positive upward trend.

In conclusion, from the above data analysis, we can know that most of the existing users are not selling out their $LQTY earned, they are putting it into the liquidity pool to stake instead. But from the $LQTY net buy amount chart, we can tell that the Liquidity Protocol does need more new users to buy in $LQTY to boost the project to the next level.

Dapp.com
Discover & enjoy decentralized tech with us.
Like
Like this Article
Currently there are no comments for this article. Would you like to be the first to write one?
Tags
DeFiStakingStablecoinPrice AnalysisInvesting in Cryptocurrency
Related Products 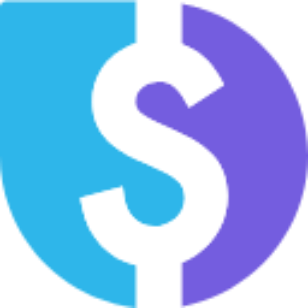