Dapp.com Integrates Tracking of WAX, The Most Watched Blockchain for NFTs and Games

Six months ago in our 9 Blockchains to Watch in 2020 and Why we mentioned WAX:

“With the successful debut of its WAX Cloud Wallet to simplify the user onboarding process, WAX has gained over 400,000 mainnet accounts opened within a month since its launch. Will WAX become the largest blockchain for games in 2020?”

WAX, has finished its integration and is now officially listed on Dapp.com as the 16th blockchain. 15 WAX dapps are listed and tracked via Dapp.com/dapps/WAX. Additional integration between Dapp.com and WAX will be done to further facilitate WAX’s ecosystem in the next stage.

One of the most active markets for NFTs

WAX has expanded aggressively on the blockchain video gaming and collectible market:

William Shatner, one of film and television's most beloved actors (eg. Captain Kirk in Star Trek) has announced to release an intimate collection of photographs from his personal life and film career on the WAX Blockchain. Each collectible item features a caption written by William himself, will be guaranteed to be authentic, and can never be counterfeited or duplicated since all transactions are secured by blockchain technology. 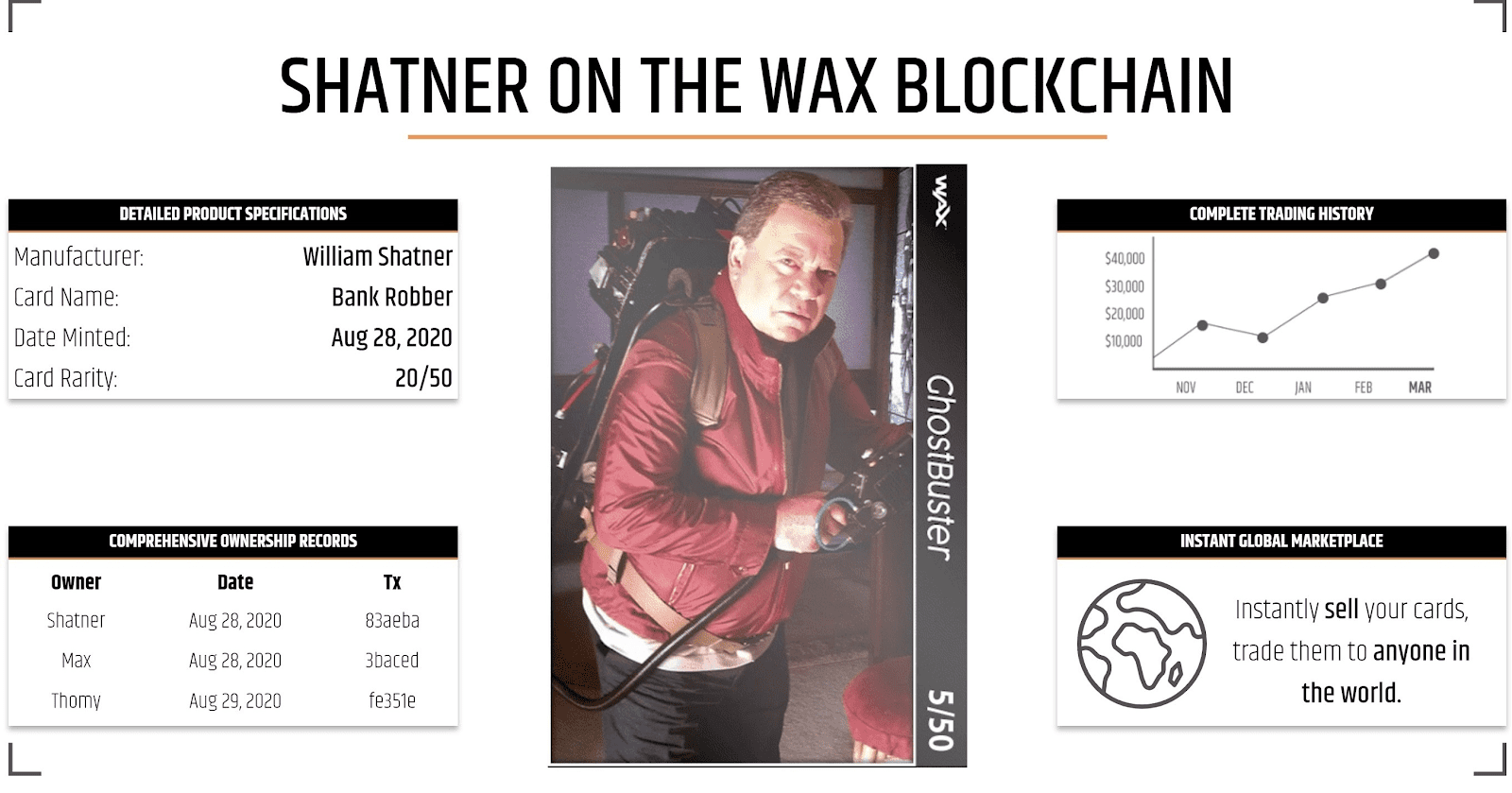 On July 3rd, WAX announced that Capcom’s iconic game StreetFighter, which has millions of players worldwide, will launch its collectibles on the WAX blockchain. The StreetFigther NFT will be the most famous game IP that released blockchain-based assets.

Topps is the most prestigious producer of trading cards and collectibles in the world for MLB, Star Wars, WWE and Garbage Pail Kids. The partnership will potentially include all the valuable assets on the WAX blockchain.

The online real-time strategy game Prospectors was the first big dapp to launch on WAX. Prospectors once set an all-time record of having 5.16K users in 24h on the WAX blockchain.

The success of Prospectors has bought leading blockchain games including 0xWarriors, Dark County and dapps such as Earnbet (Ranked no.1 on EOS) and social dapp KARMA onboard to WAX.

These are all due to the easy onboarding made possible by one-click account creation using the WAX Cloud Wallet (WCW). WCW simplifies the process for getting NFTs on the marketplace or in blockchain games: there are no private keys to manage, no complicated wallets, and it’s free.

The 1 to N scaling: Released the Biggest Worker Proposal Fund in the History of Blockchain

While all the infrastructure was built and the outstanding traction was made in the last 2 years, WAX is now ready for the aggressive expansion. More than 100 million WAX Tokens (worth millions of dollars based on current market price) are available for developers who grow the WAX Blockchain through decentralization and innovation over many years.

With over 3K users in the last 24hrs, it took WAX less than a year to be a key player in the blockchain game and NFT market since its mainnet launch, outperforming EOSIO.

What’s Next? Follow the development of WAX ecosystem on Dapp.com/dapps/WAX

Dapp.com
Discover & enjoy decentralized tech with us.
Like
Like this Article
Currently there are no comments for this article. Would you like to be the first to write one?
Tags
NftDigital ArtNFT Marketplace