Imperial Throne is a multi-player strategy war game based on the Ethereum. Pre-sale started on December 3d, 2018. All the game’s assets and gameplay are on the public blockchain. Every player enters the game as a tribal leader, but a player can take control over a piece of land only through the in-game auction system and become a lord. All players can mine Imperial Throne Tokens (ITT), recruit soldiers, and enjoy free trade in the marketplace. When the time is right, a lord can declare war against another lord and summon allies in the community to join their fight in the quest for treasures and glory. In Imperial Throne, players are fighting to be the ultimate king and to expand their kingdom.

Heimdall is the ticket to Imperial Throne. On the game page, the system will automatically screen for Heimdall in MetaMask, allowing players with Heimdall to enter. When a player recieves Heimdall, a certain amount of T·ITT (for the alpha test) or ITT will be given for free according to the rarity of Heimdall.

Heimdall, originating from the Norse Mythology, is the watchman of gods. He is the all-seeing and all-hearing guardian securing the entrance of Asgard. Standing on the rainbow bridge, Bifrost, Heimdall devotes his life to defending city gates from the attack of Giants. 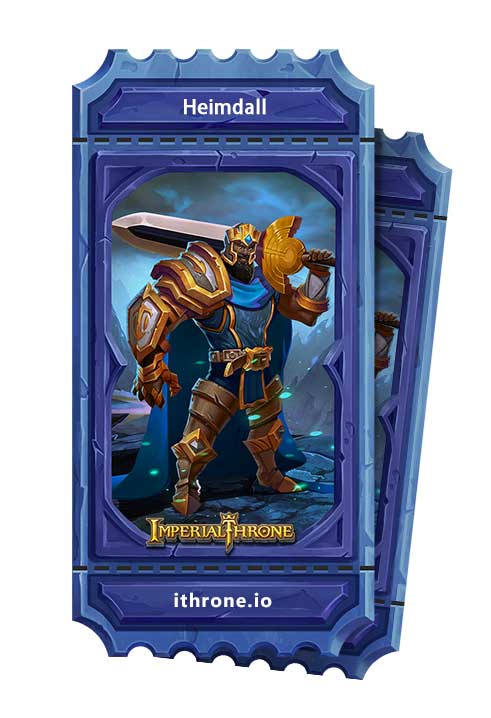 From December 6th to December 17th we will be hosting a competition where players will have the chance to win 20 Heimdall Tickets to Alpha Test Imperial Throne.

The winners will be chosen randomly from posted retweets and announced on December 19th.

Imperial Throne
Recommanded Articles
What Is .badass Domains and How to Use It?
Mar 19 · 1315 Views
What Is TomoIssuer and How to Use It?
Mar 19 · 3429 Views
How Does the On-Chain Data Reflect the $5M Tokens Hacked? The Next Victim Is?
Mar 22 · 4553 Views
2 New DeFi on Binance Smart Chain Keep Your Cryptocurrency Investment “Stable”
Mar 24 · 6093 Views
Notifications
Homepage
Topic
Dapp Ranking
Get $30 Fee Voucher
Earn Crypto
Register
Log In