Helping You Take Back Your Digital Rights With Blockstack Dapps

We are always looking to add truly useful decentralized applications from a broader source of protocols than you typically find. Today, we’re excited and honored to announce that Dapp.com has officially listed Blockstack applications!

Blockstack is a full-stack decentralized computing network that enables a new generation of applications where developers and users can interact fairly and securely. It allows users to own their own data and take it with them from app to app in the ecosystem, along with their Blockstack ID that eliminates the need for password-based logins.

More than 4 years of R&D with a team of Princeton PhDs and peer-reviewed papers led to Blockstack developer tools and decentralized ecosystem. These tools offer an easy-to-use, scalable way for developers to build secure blockchain-powered applications and for users to easily connect with these applications. Over 7,000 members in the community of enthusiasts and developers have built more than 80 independent apps on the network with more being added every day through App Mining.

We're excited about the momentum in the Blockstack ecosystem and expect to see many more dapps bringing users privacy, security, and digital freedom. 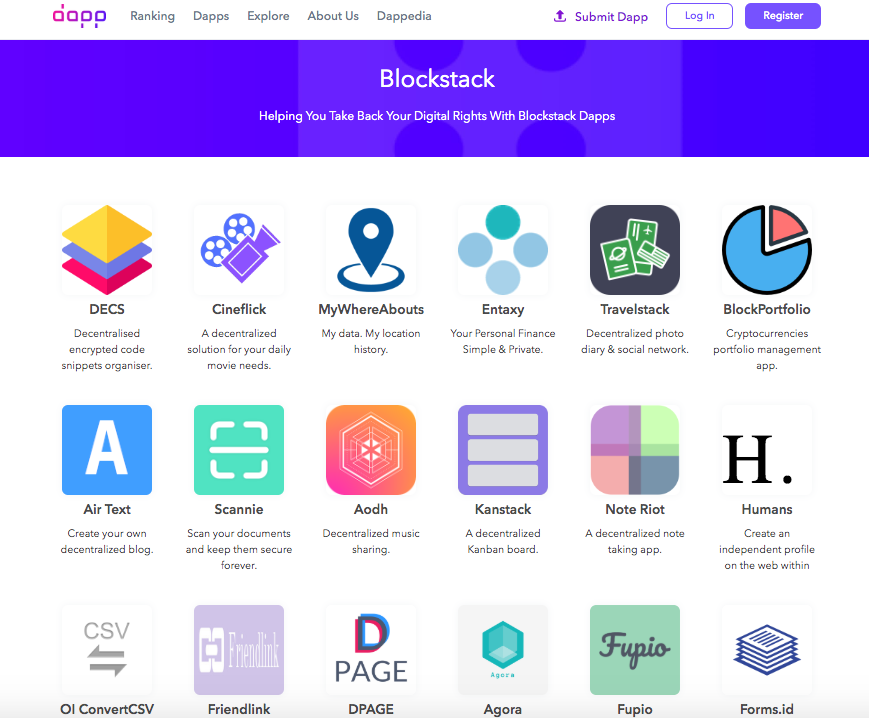 “The Dapp.com team is committed to educating new users and developers and has signaled their intention to bring more useful data to the broader dapp ecosystem that is often misled by the fraudulent activity on various crypto networks. We’re confident Blockstack apps will stand out for their utility and usability, and help bridge the educational gap that stands between users and a better Internet where they’re in control.” — Patrick Stanley, Head of Growth at Blockstack PBC.

Here are some selected Blockstack apps:

"We've been dreaming about using dapps in the same way we use traditional apps. We were hoping to see it happen in the next 5 years but with Blockstack it’s already possible," said Kyle Lu, CEO of Dapp.com, "There is no complicated wallet setup and there are already 80 dapps built for daily use - even dapps to replace Evernote and DocuSign are available. Blockstack is not built to compete with other blockchains, it is built to challenge giants like Google and Facebook."

Dapp.com
Discover & enjoy decentralized tech with us.
Like
Like this Article
Currently there are no comments for this article. Would you like to be the first to write one?
Related Dapps
Recommanded Articles
New Dapps of The Week | February 4, 2019
Feb 5 · 1525 Views
Dapp-related Termbase
Feb 7 · 1663 Views
Cryptocurrency and Blockchain
Feb 8 · 1233 Views
What Is Ethereum and How Does It Work?
Feb 8 · 801 Views
Ranking
Dapp Store
Dapps
Market
Community
Register
Log In