Interview With the Winner of Dapp.com Cup「養分家族」-San!!

Dapp.com Japanese community had a contest—Dapp.com Cup with CryptoSpells recently and 養分家族 (translated as "Nutrition family"—the nickname) won the contest! Today, we had the chance to interview 養分家族@クリスペ様! We asked the winner a variety of questions and received interesting answers!

Q. Please give us a short introduction about yourself, and how you feel about winning.

Nutrition family: I am 養分家族. I have been playing CryptoSpells since presale and I am very into the game. It is not publicly known, but I also run a website related to CryptoSpells.

Of course, I am very happy because I was aiming for the first place. I am also very honored to be interviewed by Dapp.com.

Q. Can you describe your strategy specifically for this tournament?

Nutrition family: The deck I used this time is a black "devil beat" deck. I fully utilized the strength of black, taking control of the board with high-value units such as "Lilith" and "Magician of the Wolf", then close out the game with powerful units such as "Grendel" and "Amon, the Demon Prince" in the midgame. It is the so-called good stuff style deck. Also, since I own the legendary "Nyarlathotep", I adopted a relatively large number of cards with a draw effect in order to draw it as soon as possible.

Regarding the strategy, it was important for me to adjust the deck in anticipation of the deck used by the opponent. In CryptoSpells, we know who holds the powerful legendary and limited legendary cards, so I can expect what kind of deck the holder of those cards will use. For example, if the opponent owns the Green Legend "Frigg", they will most likely adopt the meta "Poisoning Imp". Against non-legendary cardholders, assuming that blue and black will give a certain winning percentage even without legendary cards, I used a deck that counters the respective colors by selecting a 13 cost Crypto Spell.

Q. For beginners, what kind of game is CryptoSpells?

Nutrition family: CryptoSpells is a digital card game in which you can hold the card you got as an asset. In a regular digital card game, the card you get is only part of the information in the game, and the card is lost due to the end of the service of the game or the retirement of the player. However, because the cards in CryptoSpells are recorded on the blockchain, they are not stored on the server of the operation but are the assets owned by the player.

Also, you can buy and sell those cards, especially the legendary cards are traded at 5 ETH or more (over 100,000 yen). It is hard to get a legendary card, but if you win a regular official tournament or rank match, you can get a promotion card and make a profit by buying and selling it. Of course, it is not easy to win the top prize, but depending on the deck structure and strategies, you can win even without a legendary card, so there is a chance to earn profit even with no money invested.

In addition, CryptoSpells is doing some initiatives that are not in other digital card games, and the most interesting thing among them is the "card issue rights" that is given to the winner of an official tournament. With the card-issuing right, you can discuss the effect of the card with the management and issue an original card of your own. Furthermore, it has the privilege of 50% of the transaction fee being paid to the issuer "semi-permanently" every time the issued card is traded in the market.

The game has just been released and is still in development as a card game, but it is a blockchain game that can be recommended especially for those who like card games. The rules are quite simple, and I think even a beginner who is not familiar with card games can play right away. People who like card games or people who want to earn money through games are strongly recommended to play this game.

Q. Can you tell us the good aspects of CryptoSpells?

Nutrition family: In my opinion, there are 3 positive aspects of CryptoSpells,

- It is possible to earn money through the game

- Time spent on the game is less likely to be wasted

- It does not require much to start playing the game

There are 3 specific ways to earn money:

1. Buy cards at low prices and sell them at high prices

3. Sell cards that came out of card mining

I think the most attractive aspect of CryptoSpells (blockchain game) is that you can earn money in a game like this. Also, since you can sell all the cards if you get tired of the game, it means that the time spent on the game will not be wasted.

Regarding the last point I made about the game being handy to start playing, since CryptoSpells is a browser game, as long as you have a Twitter account, you can start immediately and you do not need to have a virtual currency or wallet. Initial decks are also available, and the rules have been considerably simplified so even beginners can start playing immediately.

Q. Tell us your thoughts on the future of Dapps, especially blockchain games

Nutrition family: Blockchain game is a field that I have very high hopes in. But to be honest, the current blockchain games are definitely not as good as the existing games in terms of quality. So I think that in order for the blockchain game to gain more popularity, it is necessary for the major companies to enter the market, and I hope there will be existing games that utilize the blockchain in the future. Especially since you can capitalize on the items acquired in the game, I think this feature is compatible with games like " Monster Hunter", which I am very looking forward to if it could be developed.

The blockchain game is currently available in a variety of formats, but for now, I am only interested in CryptoSpells. I myself like card games and it is very tempting for me when a card becomes an asset. In addition, the management of the game is always taking initiatives and finding new challenges, such as the currently ongoing voting system for users to decide the specifications of cards. As a player of CryptoSpells, I would like to show continuous support for the development of CryptoSpells.

Thank you Nutrition family for your very detailed answers. And we would like to thank those who participated in the Dapp.com Cup!

And now why don’t you give CryptoSpells a try? 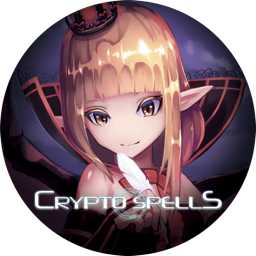