A Beginner's Guide to NFTs

For most people, when the word Non-fungible tokens (NFTs) comes to mind, they think of CryptoKitties. However, there is more to NFTs than collectibles such as CryptoKittes. With the introduction of bitcoin in 2009, a whole new market was created. It didn’t take too long for NFTs to find a place in the cryptocurrency space. However, let’s start from the very basics and get an understanding of what we are digging at. 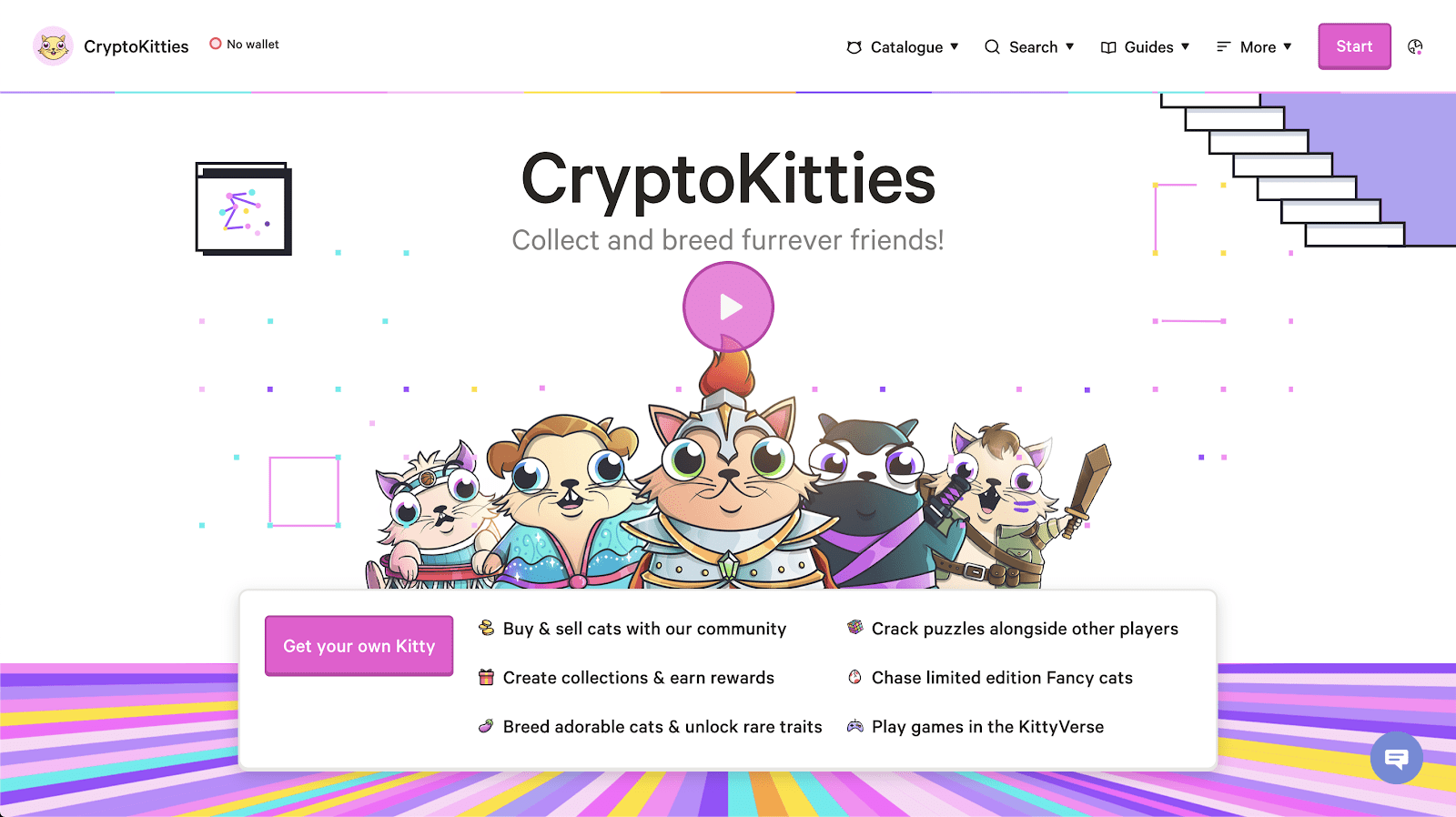 What Exactly Are Non-Fungible Tokens?

Before we delve into the meaning of Non-fungible tokens, let’s take a look at the word “fungible." When we talk of fungibility, we refer to the ability to replace a commodity with another. Therefore, “Non-fungibility" refers to commodities that are not interchangeable. To understand this better, fiat is a good example of fungibility. This is because fiat is a medium of exchange. This means that you can exchange your $100 note for other denomination of the dollar and exchange the dollar for other fiats like Euro, CAD or Yuan.

However, with Non-fungible tokens, they are uniquely designed to be non-interchangeable. To gain a better understanding of NFTs, we will have to look at them beyond being merely non-interchangeable. In a way, the very nature of cryptocurrencies makes them fungible. You can easily exchange bitcoin for Ethereum and vice versa. NFTs are cryptocurrencies in a way although traded differently. They are cryptographic tokens and uniquely represent tokenized versions of digital or real-world assets. NFTs are configured to act as verifiable proofs of authenticity and ownership within a blockchain network.

Unlike fungible commodities where you can exchange the dollar for Euro, this is not possible in Non-Fungible tokens. For instance, if a friend lends a dollar from you and decides to pay back with a bracelet, it is acceptable in a fungible context. But with non-fungible commodities, if you lend a friend a dollar, they have to return that same dollar with the exact serial number. A typical example of non-fungible tokens is the CryptoKitties collectables which happen to be one of the first non-fungible tokens. The Ethereum-based game was developed by Axiom Zen and it allows players to purchase, sell, collect and breed virtual cats. Each of the blockchain-based cats is unique; the one you send to someone is different from the one you receive unless you get the exact same one back. Each of the cats has its unique information stored in the Ethereum smart contract. CryptoKitties use the Ethereum protocol and blockchain and are ERC-721 tokens.

As it is several platforms such as EOS, TRON and NEO now have NFTs standards. While Ethereum’s ERC-71 smart contract is usually used for NFTs, the market is growing. Asides CryptoKitties, other NFTs exist and they include; Decentraland’s LAND token which represents a virtual parcel of land with LAND token. There is also SuperRare a blockchain project that allows digital artists to link their image or GIF to a token that allows them to retain and record their copyright and IP. Other use cases of Non-Fungible tokens include Collectibles like the CryptoKitties, Game props, Digital Ticketing, Identity authentication, Digital certificates, etc.

The Features of Non-Fungible Tokens 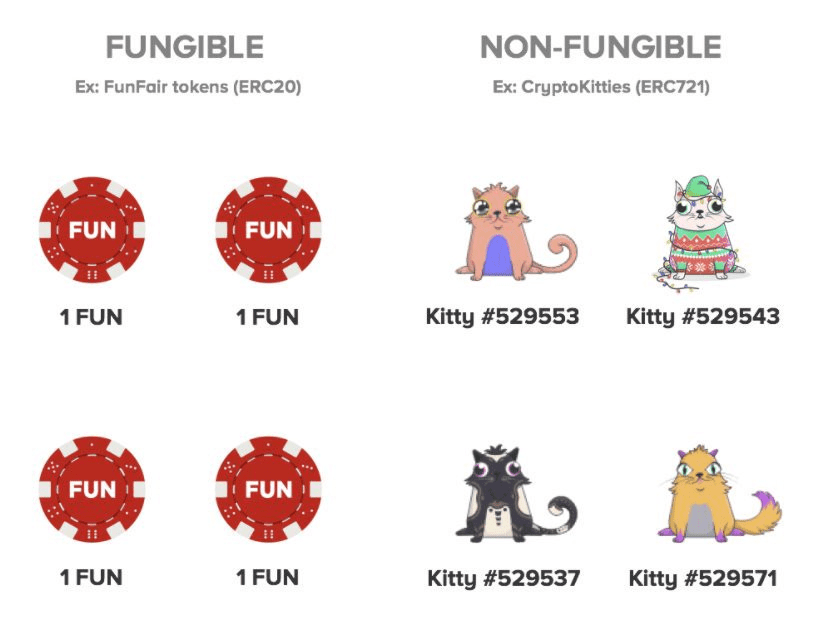 The Evolution of Non-Fungible Token

The first attempts at creating NFTs began way back in 2013 with Colored Coin which was built on the Bitcoin Network. These first NFTs were a huge stretch on the capabilities of the Bitcoin Blockchain. Colored Coins were small denominations of a bitcoin and could be represented as a single satoshi.they could be used for different use cases including coupons, property, subscriptions and digital collectibles among others. However, there were some issues with the participants agreeing on the value of the tokens and therefore, other NFTs were raised.

In 2014, Counterparty was created by Robert Dermody, Adam Krellenstein, and Evan Wagner. It was a peer-to-peer, open-source and distributed financial platform built on the Bitcoin blockchain. With Counterparty, it was easier to create an asset and came with a decentralized exchange and XCP its own crypto token.in 2015, Spells of Genesis became the pioneer of gaming assets on the Counterparty platform. They also carried out one of the first sets of ICO on the platform and launched their own token Bitcrystals.

By 2016, memes had started to migrate to the blockchain and the Rare Pepe meme (frog-like character) quickly gained a fan-base on Counterparty. It didn’t take long for the Rare Pepe meme to migrate to the Ethereum platform. The Peperium a decentralized meme market place was launched in March of 2017, with the aim of allowing memes to live forever on IPFS and Ethereum. However, it wasn’t until 2017 that the ERC721 was successfully applied to NFTs with the creation of CryptoKitties.

The Future of NFTs

Non-Fungible tokens have come a long way. Its valuation is interestingly derived from its rarity. For instance, there is no standard price for a CryptoKitty with the median price being about $25 and as high as $1,000. There is an interesting range of use cases for NFTs and while it may seem that the initial bubble that surrounded them has faded, their value is still intact. The gaming industry has realized the significance of non-fungible tokens.

In the future, physical assets will likely be linked with NFTs to enable real-world transactions. There is already a range of positive initiations of NFTs. It wouldn’t be difficult to initiate real-world use like certificates of identifications getting traded in NFTs. On the other hand, there are concerns about the NFTs becoming fragmented and creating a situation with different standards and varying degrees of valuation. However, it is creating a future where warranties and identities, birth certificates, academic credentials, artwork and property ownership can be stored and secured in an immutable way. 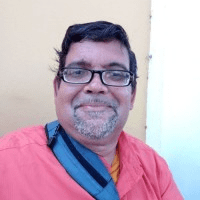 Jesús is a doctor turned cryptocurrency and blockchain enthusiast who loves sharing his thoughts on cryptocoinsociety.com to help simply crypto in order to make it more accessible to the masses.

Like
Like this Article
Currently there are no comments for this article. Would you like to be the first to write one?
Tags
NftTokenizationDigital ArtNFT Marketplace
Related Products

SuperRare
Recommanded Articles
What Is Neverlose.money and How to Use It?
Mar 14 · 1235 Views
What Is Plasma Finance?
Mar 14 · 2591 Views
Reveal the True State of the BSC DeFi Ecosystem. Dapp.com Launches New Analytics Dashboard for Binance Smart Chain
Mar 15 · 10652 Views
Have You Ever Seen the Dark Side of the Moon?
Mar 16 · 2361 Views
Notifications
Homepage
Topic
Dapp Ranking
Get $30 Fee Voucher
Earn Crypto
Register
Log In