About DAPPT Staking: 180% Annual Yield, ETH and What else? 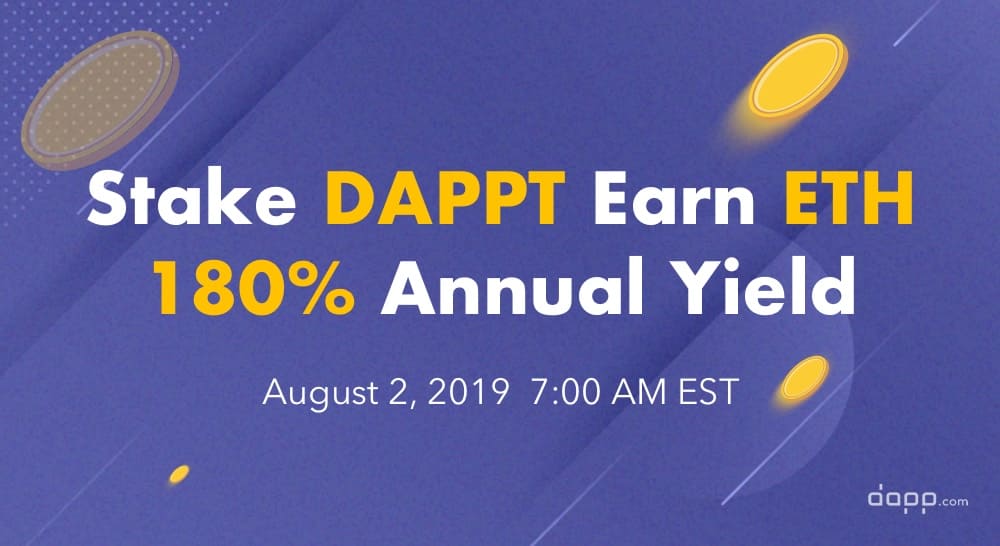 The #GOAT DAPPT Staking has been shared around all different social media since yesterday. And all the industry leaders including over 100 Founders and CEO of FBG, MXC, NGC, IOST, and Achain, etc were sharing the information all over. Like Vincent Zhou, Founder of FBG mentioned: “What’s the matter with these guys. Staking DAPPT for ETH? They are gonna lose their pants”.

But wait. Let's do a quick recap of what DAPPT has been through in the last two months besides Dapp.com being the No.1 dapp platform in the world.

We were officially listed on 4 exchanges (excluding those who just listed us without talking to us) and received strategic investments from top tier ventures including Peter Du’s Du Capital and FBG, the largest investment and trading company in Asia. That’s why we can do our first staking program in such high-profile.

About Staking, let’s take a look at the currently return in the market.

Loom and Cosmos are both world-leading blockchains. The highest return of Staking COSMOS is 20% according to Stakewith.us.

And DAPPT gives a staking return of annual 180%, which is 6 times higher than the above mentioned.

We had read about how staking tokens will cause an increase in circulation supply, which is not a good idea.

But if we stake DAPPT and get ETH

IT DOES NOT INCREASE CIRCULATION SUPPLY.

So it won’t cause dumping after the staking program.

I guess we are all set.

But this is not done yet.

The current price of ETH is around $200.

What if the price of ETH goes up to $400 after the staking program?

God the return of staking DAPPT will be 360% already.

Now its time to list out all the key items in bullet point before we release more info.

This is what happened after the news released today

So what are we waiting for?

Last question - Where do we get DAPPT?

Or check out our market at Coingecko.

The full Staking guide is coming up tomorrow.

Dapp.com
Discover & enjoy decentralized tech with us.
Like
Like this Article
Currently there are no comments for this article. Would you like to be the first to write one?
Tags