Earlier this week, we released the 2019 Annual Dapp Market Report. In that 54-page report, we covered last year's key dapp metrics, market review and outlook, and major events. Where is blockchain applications going in 2020? And which blockchains should we keep an eye on?

Here, a rundown of nine blockchains that we should pay the most attention to in 2020. 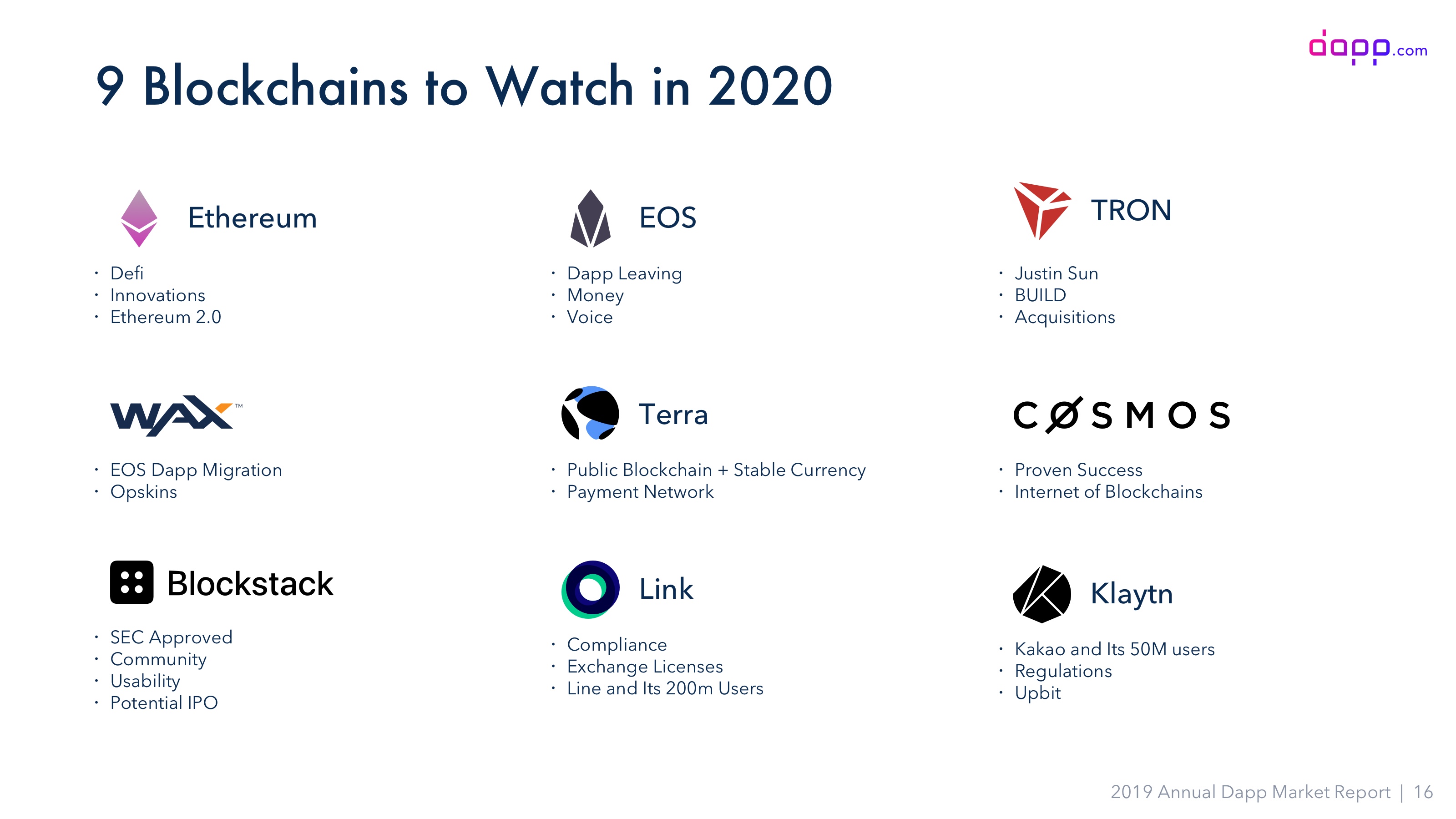 As the first-ever smart contract platform, Ethereum and its community have launched and incubated the latest and the most advanced apps of the industry. It has been the leader of the blockchain and dapps since its launch, from the ICO trend in 2017, blockchain games and NFT in 2018, to the booming of DeFi applications in 2019. Nearly all the innovations of blockchain use cases have come from the Ethereum ecosystem. In 2020, Ethereum will still have to face the price drop since 2017, but the launch of Ethereum 2.0 which is expected to reduce costs, solve network congestion, and achieve high performance must be one of the most noteworthy events in the blockchain space.

TRON is the most hardworking, or the busiest blockchain in 2019. People shouldn't only remember the Warren Buffet dinner and Justin Sun’s kidney stone, but also its achievements — TRC-20 USDT (Currently there are over 900 million USDT issued on TRON, nearly 20% of the total circulation of USDT), partnerships with two public listed companies Samsung and Opera, and the two largest investments/acquisitions in Q4 (Poloniex and DLive, the world's largest decentralized live streaming platform). There are also rumors of TRON’s potential acquisitions of impactful dapps like Steemit and Dtube. TRON has come up with its own way to grow the ecosystem through investments and acquisitions, just like a large enterprise. Will this be sustainable and successful in 2020 and beyond? TRON deserves our attention.

2019 was a year of heavy losses for the EOS ecosystem. Projects who are the earliest believers and adopters, such as EOSBet, EOS Knights, and Prospectors, have all migrated to other blockchains. And almost all the network data, including new dapps, users, and volume are behind TRON — EOS's “brother” who launched its project around the same time. EOS has been congested, and the price of CPU has increased by over 100 times after EIDOS went live. Although the price of EIDOS has dropped and the pressure is getting lower down, it still occupies over 85% of the transaction of EOS. In Q4 2019, the number of average EOS daily active dapp users has dropped to 15k, which is a decrease of 80% from the third quarter. In 2020, can Voice — the expected “game-changing dapp” with a $30M cost domain name, bring EOS back to the peak?

Wax has successfully imported a significant number of EOS projects through partnerships. The leading EOS-based projects include Prospectors, who has the highest number of active users, EOSBet (EarnBet), the biggest gambling platform, and Karma, a leading mobile social app. There is Splinterlands, the most active blockchain game on Steem with one of the most active NFT trading markets in the world has also migrated to Wax. With the successful debut of its cloud wallet WCW to simplify the user onboarding process, Wax has gained over 400,000 mainnet accounts opened within a month since its launch. Moreover, Opskins, one of the world's largest gaming asset trading platforms, has started to shift its resources to Wax. Will Wax become the largest blockchain for games in 2020? OR: Will Wax becomes the blockchain that dominates the game market this year?

In 2019, the most well-known model in the blockchain space must be “Public Blockchain + Stable Currency”. Yes, we’re talking about Facebook Libra and DECP issued by the PBoC. But you should not miss Terra, a global blockchain payment network that has already been at the forefront. According to our statistics, the Terra-based mobile payment platform CHAI has more than 500,000 active on-chain users and it has already been processing over $1M of settlements every day. Terra has structured the overall business arrangement in Asia and announced its plan to support more financial services. Will Terra stand out from the most competitive stablecoin war in 2020?

Unlike many of the above-mentioned blockchain platforms, Tendermint, a core of Cosmos blockchain, allowing developers to build custom blockchains instead of dapps. Currently, Cosmos has already established a strong ecosystem and a few projects are powered by Cosmos, including Binance Chain (Binance Dex), Lino(the decentralized content sharing platform that has already supported DLive’s 410,000+ on-chain users in the past 3 months), and Terra (the leading blockchain payment network). These projects have proved the scalability and usability of the Cosmos blockchain. Now we’re expecting to see Cosmos realize its vision of building the Internet of Blockchains.

As a decentralized computing network, Blockastack boats people and projects that put users in control of their data and identity. Last year, Blockstack had an amazing run: Conducted the first SEC qualified token sale in US history and raised more than $20 million under SEC Reg A+ exemption; the Blockstack community is growing exponentially — from only a couple of dozen dapps to more than 300 dapps at the end of 2019; quietly approaching to its first million users. Blockstack not just brings us the dapps that respect our privacy and give us the digital freedom as they committed to do so, and also brings usability into the dapp ecosystem and brings decentralization closer than ever to normal people's life. 2020 will be an interesting year for Blockstack with the launch of Stacks 2.0 and a potential IPO? We'll see.

The social media giant Line is the 20th largest social app in the world with 194 million users with 164 million MAU. Link Network is the blockchain platform built by Line. Line has obtained a crypto exchange license in Japan to allow users to purchase cryptocurrencies, including Link directly from Bitbox exchange, one of the Line apps. In the new year, we should pay attention to this dream combination of regulatory compliance with 200 million users and see how it will bring numerous new blockchain apps and mass blockchain applications.

Klatyn, the blockchain project built by South Korea’s most popular social app Kkao social giant Kakao, aiming to provide the daily usage of blockchain to 50 million people. Currently, as one of the top five crypto trading markets, South Korea has a very high expectation for Klaytn yet the regulation is still unclear. Backed by the Kakao Group, Klaytn is offered resourceful support but also it brings a lot of pressure from the regulatory agencies to Klaytn. There are already many applications built on Klaytn. Can we see the circulation of Klay (the token of Klaytn) and its utility within these dapps in 2020?

Dapp.com
Discover & enjoy decentralized tech with us.
Like
Like this Article
Currently there are no comments for this article. Would you like to be the first to write one?
Tags
Blockchain
Recommanded Articles
Dapp.com Airdrop Is Now LIVE!
Mar 1 · 12977 Views
New Dapps of The Week | March 4, 2019
Mar 4 · 7814 Views
What Blockchain Should I Build My Dapp On?
Mar 6 · 15391 Views
Women in Dapp
Mar 8 · 10197 Views
Notifications
Homepage
Topic
Dapp Ranking
Get $30 Fee Voucher
Earn Crypto
Register
Log In