In September and October 2018 333ETH has been on the top of Dapp.com ranking. We have tried to unveil the secrets of its success that began on the Russian market. 333ETH version 2.0 introduces a new concept of a sustainable and honorable pyramid, limiting daily investment to 500ETH and lessen the losses to investors from the first version of the dapp. We have discussed the particulars of the new concept with the creator who is convinced 333ETH is the only pyramid that did not become a scam.

We heard your team actually consists of one person. Tell us about the team and workflow.

I founded the project at the end of August 2018. At that time, I had only an idea, but once I realized its potential, it was not difficult to gather a small team to implement it. The first members of this team were a programmer who helped me to write smart contracts and an IT specialist who did the landing of the project.

How did you get the idea to create 333ETH?

The concept of such a project is not fundamentally new. In fact, it is a revised and improved version of 333ETH 1.0. I was working on blockchain products before and one day I came across Pandemica. I was inspired by the concept of automated redistribution of cryptocurrency assets, but after studying the contract code, I found a critical error in it, which was a time bomb. I discovered a vulnerability that prevented the smart contract from running smoothly while processing a large number of transactions. It was obvious that when a critical number of transactions was reached, the smart contract would sooner or later be blocked, which eventually did happen. At that time I understood the potential of such a product and decided that I can create a more advanced and smooth alternative. 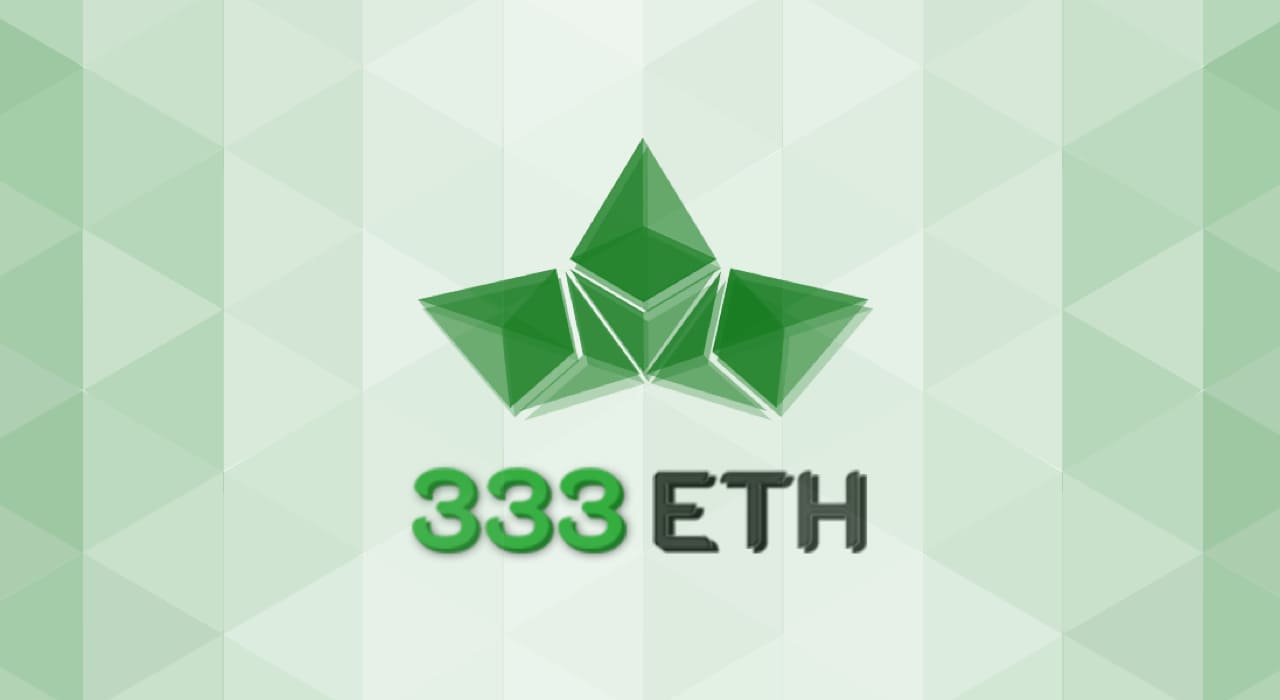 The name 333 has something to do with superstition (this is a lucky number)?

The decision to name the project 333 was initially just a marketing move, such a name is easy to remember because the interest rate is 3.33%. However, later on, there were a few mystic events related to this number. Firstly, we hurried to launch the project and once all the necessary tests were completed, I put the smart contract on the network, not thinking about the date of the launch which became the first sign. It was 3.09, and 9 = 3+3+3! At first I did not pay any attention to it, but when I made the first transaction in the amount of 0.333 to 333ETH 2.0, to my surprise I noticed that the last transaction on the smart contract of 333ETH 1.0 was 0.0333ETH. I'm not a superstitious person, but the probability of such a coincidence is low.

You are probably often told about the similarities between 333ETH and Fomo.

With Fomo? I'm not familiar with this project.

Some users compare pyramid with a scam, what can you say about it?

Of course, in the past such schemes almost inevitably became scam and the main reason for it was human greed. Once a huge amount of money is accumulated in the financial pyramid, even the most decent people with access to it are tempted to get hold of the money. This, in fact, is the main difference between my project and the traditional pyramids, the unique features of smart contracts exclude the possibility of interference from the outside even from its creators. It allowed me to neutralize the factor of human nature creating a unique tool for investors to get dividends.

Many well-known decentralized applications did not live long, their success was like a flash: Ponzi scheme - Shrimp Farm - Fomo, we noticed that after a month since launching the indicators of active users of 333ETH version 1.0 began to fall and here you are, launching version 2.0.

Me and my small team became pioneers of this industry, which is now gaining volume. Due to the lack of similar projects and experience of their promotion, I had nothing to rely on to design the ideal financial model. As a result, the practice has shown that the interest rate of 3.33% was too high for such scheme, which is why at one point the debt exceeded our ability to attract cryptocurrency to the project. At that time I personally had absolutely no experience in crypto-products marketing and promotion, therefore, it also affected the volume of new investors. However, 333ETH 1.0 was the first in the history of mankind (as far as I know) a financial pyramid has lived a full cycle, from booming to slowly decrease, fulfilling all its obligations to its investors. At that moment I realized that the pyramid has reached the “apex” and there was an inevitable trend decrease. I made a difficult decision and announced to everyone that I can no longer attract new investors because I was aware that they would be losing money.

I immediately stopped the advertising campaign, and then honestly and openly announced the project shut down explaining in details the current state of 333ETH. I did this despite the fact that the project could continue to generate income for myself by attracting customers driven by advertising hype and their own greed. At that time, I still had some unspent money from the advertising fund, about 500ETH. All my investors, for obvious reasons, insisted on continuing the advertising campaign. The pressure on me was huge, thousands of investors demanded to trap more people in order to continue receiving 3.33% per day, but my moral principles was my support in resisting that pressure. As an alternative compromise, investors demanded at least to use the rest of the advertising fund in order to extend 333ETH 1.0 life. I also rejected that idea, because the debt of the project at that time was about 500ETH per day and the advertising budget in the sinking project was able to extend its life literally for a few hours and would not have solved the problem of reimbursing those customers who did not have time to gain dividends from their investments.

Instead, I developed a plan that would be able not only to fully cover all the losses to those customers who did not get interest, but also, based on the experience of the first project, to create a more balanced product with new features, unique solutions, mechanisms and real interest rates, which all collectively allowed to increase the survivability and reliability of the 333ETH 2.0 and make it a long-term tool. 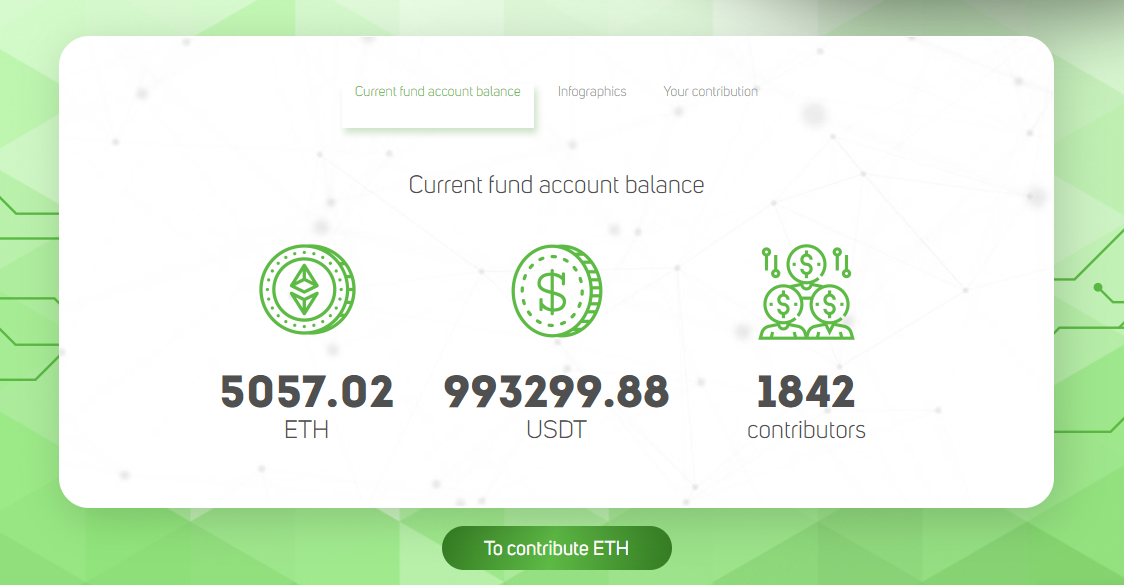 I successfully implemented this vision. Taking into account the popularity of the project, I deliberately created smart contract limits in the amount of 500 ETH per day. This new unique feature guaranteed a steady development of 333ETH 2.0. Since then, a significant amount of the first project investors came out with a good profit. Moreover, they eagerly continue investing, for example, during the first four days of 333ETH 2.0 the limit of 500 ETH was filled by customers from 333ETH 1.0 in a matter of seconds without any advertising, literally in 24-26 seconds.

However, I should emphasize that the main priority for launching 333ETH 2.0 was to compensate the losses of late investors in the first project. To accomplish it, I designed and implemented a special plan, I gave them a closed access before the official start of the second project ( I knew the wallet addresses of those people), providing them with a profit guarantee, because the first investors, as you know, will always be out of risk. In addition, I announced that I would do everything possible to return all customers their deposits to breakeven with 333ETH 1.0 using the funds from the second version. So far, all the first project investors automatically received their compensation, they do not need to participate or do any additional registration. Moreover, I keep sending newsletters to them, but a part of the first project investors do not follow our news and, quite possibly, do not know about the launch of 333ETH 2.0.

What do you think about the average lifetime of decentralized applications?

It all depends on the purpose of these dapps. If the task is to create an honest long-term tool, with a qualified team, a well-thought-out, and well-written contract, and the initial funds for effective launch, then its life can be surprisingly long.

The first project and the second use the same website, how we distinguish them?

Due to the fact that the second project is a logical continuation of the first and 333ETH brand has already gained wide popularity in the global cryptocurrency environment, I did not even think about changing the domain or website.

What are the differences between the projects?

The difference is fundamental: based on the knowledge and experience gained in all aspects of product promotion, I took into account the outcomes from the first version while creating 333ETH 2.0. First of all, we are talking about a viable interest rate, the current needs of the market and restrictions in advertising (e.g. ban to advertise on Youtube, Google, etc.).

How long do you think 333ETH can stay in top positions? What is the next step for this project to reach a new level?

Given the fact that the first project with all its shortcomings was on the top of Dapp.com ranking for a few weeks, 333ETH 2.0 will do it in a matter of days. We expect the new version to be much more popular among investors as its reliability increased significantly after limiting the daily investment to 500ETH.

333ETH 1.0 guarantees lifetime payouts, how is that possible?

In the past, I set myself a goal to create a truly long-term project. However, 333ETH 1.0 experience made me less optimistic, therefore in 333ETH 2.0, I stopped advertising this statement. Nevertheless, I intend to fully repay the clients of the first project. It's a matter of honor for me.

Money was never my goal. As a conscious person, I just wanted to create a self-promoting self-sufficient project, where the main tool for promotion would no longer be advertising, but an impeccable reputation and reliability for investors. Once I fully achieve it, the entire advertising budget will go to charity.

I have been working on a strategy for a while now, even considering the most pessimistic scenario. However, given the relative success of the first project, I do not want to advertise my future plans beforehand.

Have you been tracking where most of your investors come from? What market do you target: Russian or international?

I am mostly familiar with the Russian-speaking audience and this familiarity made the project succeed. Ideally, 333ETH will expand to other countries where cryptocurrency is not illegal.

What makes 333ETH 2.0 a sustainable pyramid?

The combination of 3 factors makes 333ETH 2.0 a uniques product:

1. The first pyramid in the world that did not become a scam.

2. The first pyramid that pays off losses to its investors.

3. The first pyramid that refuses to accept deposits from potential customers (by limiting daily transaction to 500ETH).

This statement is based on my knowledge in this area, although it is possible that in world history there were some isolated cases, which I do not know.

What do you think about 333ETH 2.0 and it's new features? Let us know in comments below, and feel free to suggest any dapps that you want us to interview or review in the future.

Dapp.com
Discover & enjoy decentralized tech with us.
Like
Like this Article
Currently there are no comments for this article. Would you like to be the first to write one?
Tags
Blockchain
Recommanded Articles
Love Around Dapps | V-Day 2019
Feb 14 · 5639 Views
AMA Episode 9 | Guest: Jason Rosenstein, CEO & Co-founder of Portion
Feb 16 · 3881 Views
New Dapps of The Week | February 18, 2019
Feb 18 · 6306 Views
Trendsetters Around the Dapp World
Feb 21 · 4405 Views
Notifications
Homepage
Topic
Dapp Ranking
Get $30 Fee Voucher
Earn Crypto
Register
Log In